I am so grateful and honored to have had the opportunity to speak to the staff. A lot of people have asked for a copy of my speech. Here it is. However, since I wanted to emphasize certain parts of words, the format is kinda goofy. 😂

“What good is an idea, if it remains an idea?

Good morning! My name is Karstan Bock, I am a upcoming 8th grader, on the Ospreys Team. When I was given the opportunity to come and speak to you today, I was very excited for 2 reasons. First of all, it is fun to talk about one of my passions. Secondly, I get to thank a huge source of support for me and my idea. This source particularly has helped me promote and sustain excitement about my idea, usually right at times that I am not feeling very excited about my idea. Dr. Hedrick I want to really thank you for all that you do for me. Also, Ms. Denny, Ms. Smallwood, Ms. Pinner, Ms. Theisfield , Ms. Newman, Ms. Foshay, Mr. Vogel, Ms. Scott, Ms. Troxell, Mr. Laney, and Dr. Hatzopoulos, a huge “thank you” goes out to you as well, for always supporting me and acalympics.com!

I told you that I am excited to speak to you today about a passion of mine. I have a lot of passions, my pets, music, learning, and helping people. The later two passion are what motivated me to become a website designer and CEO for my company acalympics.com. This is what I am going to talk to you about today.

Just in case you don’t know my family, I have to give you a little background information . I have a brother Kaden, he is an 11th grader at Ocean Lakes Math Science Academy. Kaden came here when he was in middle school, always participated in the Stem Robotics Challenge, with a great deal of success. When he was in 8th grade he won the middle school Robotics challenge and earned the “big trophy”. Seriously it was taller than he was, and he was (and still is) 6’4. Being his younger brother, I decided I wanted to earn a huge trophy too. So, in 6th grade I joined the Cyber team, to compete in the Cyber Stem Challenge, in hopes of winning the big trophy.

When I started the Cyber Competition Club, I found out for the Cyber Competition, we had to create a program to meet an unmet or undermet need in education. It seemed like I hear that the US didn’t not perform very well in math so, I decided to research that. I have to be honest, the results I found horrified me! According to Pew Research ( http://www.pewresearch.org/fact-tank/2017/02/15/u-s-students-internationally-math-science/ ) the United States performed over the average in both Science and Reading, however we performed well under the average in mathematics.

Personally, I love Math. I started looking for a reason for why students would perform so badly in math. Now, I am going to give you a bunch of information, and I am going to move quickly through it. I have brochures, that you can pick up and take with you, if you would like to check out the sources or the studies that I refer too. In my research, I came across 2 very powerful thought provoking statements. 1st statement ALGEBRA IS KNOWN AS THE GATEKEEPER SUBJECT. Higher paying professions all require Algebra. I did a quick search and found 42 professions from boiler maker, and welder to chemist that require Algebra, daily. All 4 year university and college programs require Algebra. Now, are you ready for the 2nd powerful statement? Guess what the most failed course in both high school and college is??? Algebra.

It seemed to me that there was a huge breakdown where Algebra was concerned. I found a site that referenced a study conducted by John Hopkins, stating that a huge reason for kids not doing well in math could be contributed to poor math fact fluency skills. They went on to explain how students would get bogged down by trying to figure out math facts and that would hinder their ability to solve complex equations.

I decided this was not math specific. In almost every aspect of life, you need basic skills in order to complete a task at a higher level. For example, in music if you are spending a whole lot of time trying to determine what the note is, and how to play it on your instrument, you are not going to play very smoothly. In my mind, this was like having too many computer tabs open. Having too many tabs open, causes your whole computer to slow down, plus you forget what exactly you are doing and get distracted with other open tabs. I decided fact fluency was a problem I could address.

It was funny, because once I decided what to work on, I remembered my idea notebook. A doctor once told me that I should keep a notebook of any ideas that I had, one time I had an idea, to make learning like video games. You could play for a team, and earn points for you team. In my idea, you would earn different medals for your team, like in the Olympics, regardless of skill level, everyone could contribute something. Originally, I thought I could make a game and call it Math Olympics. I talked to my parents, and some of my teachers about this idea, and everyone I told thought it was a good idea. In fact many teachers said “I wish I had something like that for “music theory, science, English”. I realized I could add different subjects in later, so instead of being Math Olympics, I could call my idea Acalympics (Academics Olympic Style). But, for this competition I would just focus on math, as I had a short period of time to get this working.

I was really excited about this. I spent a ton of time looking through the Virginia Dept of Education to make sure I had the topics and the orders that they listed for each standards in education. I made brochures, I made a trifold, I put in a whole lot of time trying to code this on the Raspberry Pi for the competition. Finally, the big Cyber Competition day came. I could not wait to present my idea to the judges! During the day, I had the opportunity to tell Dr. Spence about my idea. He said “Karstan I love it! How do I get it working in my schools?” I wasn’t really sure, because the way I had to format it for the competition was not in his best interest. The Raspberry Pi that I had to use, was expensive, and finicky. You could accidentally delete your code pretty easily. True story! I told Dr. Spence I wasn’t exactly sure, but I would think about it. I presented my idea to the judges, they liked it. I just knew I was going to be awarded that big trophy just like Kaden had.

But, I took 3rd place and got the smallest trophy ever. Honestly, take a look! 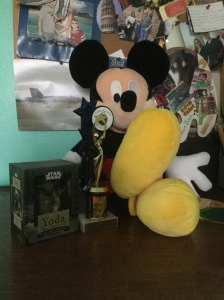 So, I was pretty disappointed and was in the middle of feeling kinda sorry for myself, when my brain started replaying a couple of conversations. I started remembering Dr. Spence and his remark, “Karstan I love your idea! How do I get it working in my schools?” I also started remembering all of the conversations I had with teachers, where they liked my idea and all wished that they had something like that. I decided I still thought I had a good idea, and that i could still help people. So, instead of feeling sorry for myself, I would try to develop a website. I did not have any idea about how one built a website. But I just knew I could learn! I worked on Acalympics every day during the summer between my 6th and 7th grade year. I wish I could say it was easy, but the truth of the matter is, it was and still can be difficult. (Sometimes, I think I can fix a question really quick, and it ends up taking me 3 hours.) On, November 24, 2017 I was able to publish Acalympics. I was so excited when 100 games were played. It was probably just my mom and grandma playing them, but I was excited! I kept working on subject of math, in Acalympics until I had well over 20,000 questions written. Then, I decided to start on some of the other subjects. Personally I take a music theory test at ODU every year. There is really nothing out there to help kids study for it, other than boring practice tests. However, I knew I could address this subject with Acalympics. Also, Ms. Barnes Mamaril asked me if could put something together for Spanish, and I was happy to create a Spanish category! Then, in order to help myself study French, I made a French vocabulary section.

As of today, I have over 40 teams using Acalympics, and not just in Virginia Beach. I have teams located in Michigan, Arizona, New Hampshire, California, and even Haiti and London! Over 27,000 games have been played, and over 500,000 questions answered. So, even though I didn’t win that big trophy, I did win something just as incredible as that big trophy. I won, just in a different way. A lot of people have given me great ideas that I am trying to implement. I am still working on Acalympics everyday, coding one question at a time. 😉

Thank you so so much for listening to me speak, today! If you have any questions for me, just feel free to ask me. Also, you can always send me an email. I would love for everyone of you to have a team that is using Acalympics. But, please please listen to what I am about to say!! The single most important thing I need to say today is, “THANK YOU” . Thank you for all that you do to help us students experience success. We don’t tell you often enough how much we appreciate you! Thanks for listening to me today!

Challenge yourself and set yourself up for success by engaging in brain aerobics.